The Drunk Rats - A Mauseritter Report

Finally, the moment has come! The eternal DM curse was broken and I got to play. Seriously though, I have played like 10 games in the past 5 years, so it’s always good to be on the player side for once. This time it was a session of Mauseritter, a oneshot campaign taken from the starter book. 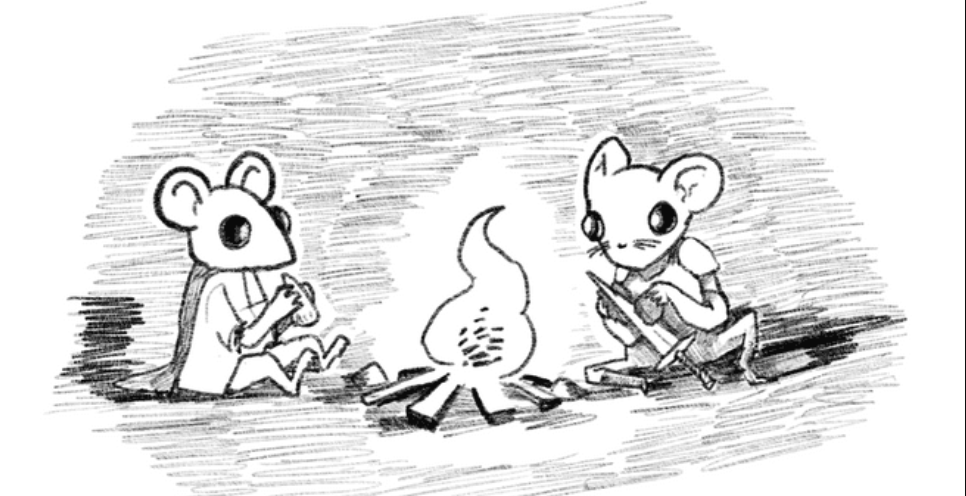 The game uses the Into The Odd rules with some minor twists and is set in a fantasy world where the main characters are mice. I’m really bad with names, so I forgot all the names of the campaign. I’m sorry. The adventure begins with us, a group of 5 mice, traveling towards the Stump City because it’s said that people in that area disappear, and we were the only ones brave enough to make the journey.

When we arrive we find no living soul. Everyone is gone and the main entrance to the city has been closed with dirt. After finding a secondary entrance (with rat traces next to it) we go in, just to find a piece of cheese, carefully laid down next to a mouse skull. Clearly a trap! We throw some rocks at it and it triggers, saving our lives. The corridor continues for a bit until it reaches another door. Actually, another trapped door, one we avoid with ease.

The city is empty, houses in the walls watch silent over the barren streets. In the middle of the stump there’s a lake with murky water. By exploring the water we find out that something was dropped inside, and we also find a pouch with some Pips (the currency of the game). We’re no heroes but something must be done, so we climb the first ladder to investigate one of the houses; while doing so, we also hear a cackling laughter coming from one of the tunnels. Rats.

The house is empty, looted. As we explore one of us sees a shadow on his face and we promptly react by preparing for whatever is on the ceiling of the house, waiting for us. The plan doesn’t really work but we still easily manage to destroy the spider that was trying to ambush us. The second house we explore also has some monsters inside: more spiders of whom we dispose with ease. Other than spiders there are also cocoons here, mice wrapped in spider silk who we free. They tell us the story of the city: of the gold statue they dropped in the pond to protect it, of the snake guarding the city from the spiders, of the flute that can control the snake and of the Living Rats, a gang of rats that invaded the city and took the flute along with all of the inhabitants, and took them somewhere else. We have nothing to to but to give some food to the poor creatures and encourage them to reach the Oak City, the capital.

By exploring some more we find a room and a tunnel: the room leads to a cheese factory, a location that also holds an iron bar door from where we can see the giant eye of the snake. The tunnel leads to a cave: an open area where the drunk rats are reunited. In the cave there’s a brandy bottle that explains the state of the rats, a door that leads to the cheese area and a table. They also have the flute, that they awkardly try to play with awful results and pass to eachother every couple of minutes. This calls for a plan and we try to find one, at the end this is what we came up with:

One of my companions sets up some traps in the tunnel that leads to the main area, in the meantime I use a darkness spell on the table to try and get the flute while they’re distracted just to make them follow me into the tunnel so they get hit by the traps. Everything is perfect, except for one thing. When I cast the spell… I become mad.

The session ended here. It was a fun one. My play report was probably not one of the best ones as I noticed it’s kinda hard to write one when you’re one of the players inside of the DM. This was my first time playing Into The Odd and I think I enjoy the system. The biggest problem I have with it so far is that it doesn’t feel deadly enough, but maybe it’s something that fixes itself in the long run with the permanent injuries and such. I’m also not sure if I like the automatic “To Hit” thing, even if actually it’s just a semantic difference. I’ll definitively will be playing more, we’ll see how it goes.